You LEGO, me LEGO, we all have LEGO, right? But have you ever been extremely LEGO, yo? Hard with LEGO? Adult LEGO’d? If you haven’t and want to step up your game, let this be an introduction to the world of LEGO® for adults.

LEGOing for adults is broken down into six “zones”: Entertainment, Arts/Design & Music, Travel & History, Star Wars™, Science & Technology, and the one I dabbled in, Vehicles. More specifically, the Ford Mustang Shelby GT 500 from the LEGO Technic series. What is the Technic series you might be wondering? The Technic series are LEGO kits priced between $9.99 and $449.99 that model real-world vehicles. Featuring working gears, wheels and axles that kids (and adults) can assemble with an augmented reality (AR) feature to add to the fun. The entire experience helps increase understanding of the intricate details that make the vehicles work. And when LEGO says intricate, you better believe they mean INTRICATE.

The difference between the Technic sets and the other LEGO sets I’ve dealt with is the complexity. I’ve built LEGO buildings with my kids, but we don’t place individual clapboards on a roof or create a LEGO approximation of the architecture to support the exhibition. Assembly is simple and gives the impression of complexity, while the Technic sets are complex, intricate and, unsurprisingly given their namesake, technical.

544 individual parts, assembled in 166 steps, guided by 107-page instructions greet you when you open the packaging. It’s a lot, and while it may seem like you need an engineering degree from Berkeley, Caltech, or Stanford, it actually just requires focus and attention to detail, more than any sort of advanced intelligence. Each LEGO piece is divided into four bags; two large pockets that hold the larger parts and two smaller pockets that hold the connectors. The large and small pockets that hold parts that will form the chassis, the interior of the car, are numbered “1”. The large and small bags, which hold parts for the bodywork, the exterior of the car, are numbered “2”. Obviously you start with bag(s) number one. 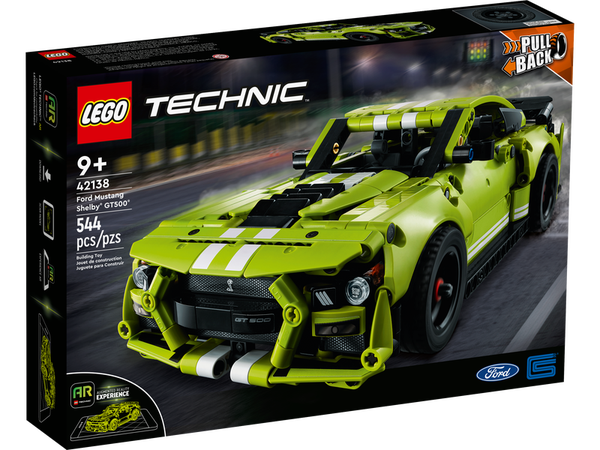 This special Technic set has a “pullback” function to generate kinetic energy to move the car. The gears are key to enable the pull-back function. Starting with the two gearboxes, connect an axle through both and squeeze them side by side to create one large gearbox, then connect more axles to create a half frame for the car. When that’s done, set it aside and start building the other half of the frame. Once that is done connect the two frames together creating the base of the chassis for the car. This is basically an introduction to the rhythm of the construction of this model; Creating simple machines and simple structures and combining them into a more complex machine or structure. Once the chassis is complete, dig into pocket number 2 and repeat the cadence again; Construct and connect the bodywork around what you have already built and add accent decals on the outside to make the car look closer to the real vehicle.

Assembling the LEGO set was more intuitive than I expected. On each page of the LEGO manual you will find an indication of which part you need and the number you need along with the direction in which you need to assemble the parts. There are no explanatory words, only pictures. And if you have an axle or a boltless carrier (of which there are several shapes and sizes per set) there are scaled handy displays to help you find the right piece for the job. One of my only complaints was that there were several pieces of similar size, shape and color and I had to interrupt my flow to see whether or not I needed this gray round LEGO thing or this other slightly darker gray round LEGO thing …or does it matter at all. You are the same, aren’t you? Right?!

The other complaint, or rather an observation, is that the Technic series seems very unforgiving. Full disclosure: I misplaced a track or two (as one does), and I was worried I’d “boned” myself for lack of a better term. Those missing plain black connectors would impede my progress and I would have to scrap my entire apartment for these parts or more than likely order more of these parts from LEGO. Turns out it didn’t really matter. I had enough reserves to compensate for my clumsiness. Not much mind you, I had three or four black connectors left, but it was enough padding (also note that LEGO will send you most parts free of charge as replacements if you report them missing).

After ten hours over six days of construction, I was finally done. I had an immense sense of accomplishment, and when I tried to roll my newly designed car onto the ground, I felt a deep disappointment: it wouldn’t move. The wheels couldn’t roll, and if they couldn’t roll I couldn’t use the AR function because the car had to be moving for it to work. In order to fix whatever was affecting the wheels, whether it was an axle or gearing problem, I had to remove most of what I had constructed because it was so solidly assembled and I just didn’t have the resources had to repeat this process one more time. So instead of a “Display and Play” LEGO Technic set, I only have a “Display” LEGO Technic set, which is fine. I’m fine with that, but again very unforgiving.

If you’re the kind of person who finds relaxation in solving puzzles or crafting, or if you consider yourself to be good with crafts, the LEGO Technic series could be for you. On the LEGO website, they offer the practice of LEGO building as a mindfulness exercise, and having engaged in that experience, I tend to agree. The Technic series is LEGO for the hobbyist, comparable to building a ship in a bottle or a model airplane or with a 100% completion rate in Elden Ring. When you’re in the zone constructing that three-dimensional puzzle, even if you’re frantically searching for a piece you just spied five minutes ago, there’s a zen to cataloging your progress. And when you’ve finished building your favorite vehicle, whether it’s moving or not, you’ll be moved by the pride you feel in accomplishing your task. Or at least I hope so.

For a birthday preschoolers will never forget, throw the party at the zoo! While it may seem like a small personal requirement, it doesn’t have […]

Vortex is a hit for any event | Wender Mind Kids

Vortex is an IdeaPros certified partner. Take turns hitting the target or play simultaneously to allow for a level of excitement that similar games just […]